I Found XSS Security Flaws in Rails – Here's What Happened. 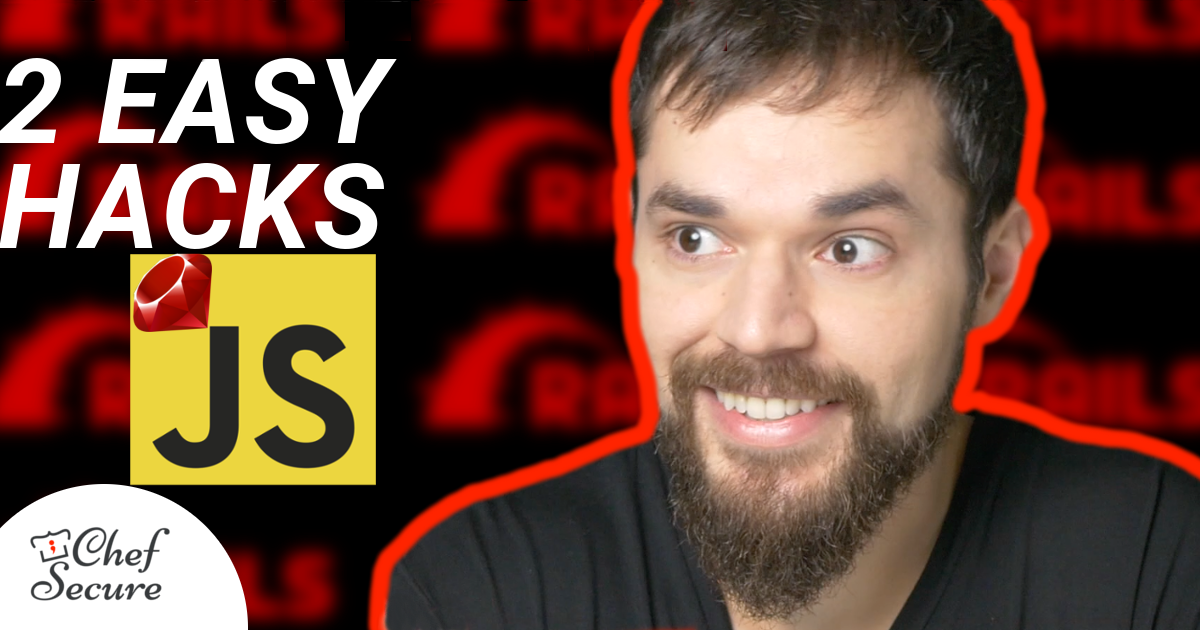 Take a look at this code:

This is a simplified version of what protects JavaScript strings in the Ruby on Rails framework from attacks.

Except for the past 5 years, there've been 2 things missing that could still allow attackers a way in.

So what's wrong with it?

Ruby on Rails is a web framework used for quickly building web applications with minimal setup and configuration.

Although it's isn't so trendy anymore, it's stable and reliable in most cases so it's still used by a lot of companies like Github, Shopify, Airbnb, Soundcloud and even here at Chef Secure.

The code I showed you earlier is a function used by developers to escape untrusted data for safe use in JavaScript strings.

As you know, JavaScript strings can be created with single or double quotes. However when ES6 was introduced in 2015, it added a new way to create strings using what's called template literals.

The difference: template literals allow you to build strings while including variables and expressions inside.

Walking through the vulnerability

Here's an example. Let's say you want to show a user's online status using their name and a getStatus function that takes in their id so the end result looks like this:

The old way would be to add the different pieces of the string together.

The new way with template literals allows you to combine these pieces together inside a single string:

So how do we exploit this?

As I go over in the Attacks inside JavaScript recipe in my XSS course, the most common way attackers achieve XSS in JavaScript is by breaking out of strings in order to get into the execution context - the place where your code gets run.

Now, in contrast to HTML where you can have invalid syntax without much consequence, JavaScript is very picky and will stop working with even the smallest error, so you need to make sure you end up with valid JavaScript after your injection.

The pattern I present in the recipe is simple:

This allows you to break out of JS strings without errors – just like adding in a new variable.

Do you see what's missing now?

The escaping doesn't account for backticks being used to create strings via template literals. In this case, this means we can run our exploit using the exact same pattern with backticks for the string characters.

It turns out that the same benefit offered by template literals to combine expressions inside strings, also allows attackers to execute malicious code without even having to break out of the string!

So to launch an attack this time, we'd just surround our payload with the ${} interpolation piece and we don't have to worry about any extra parts.

And now the second fix is to escape the $ character to stop this.

It turns out this scenario was already discussed 8 years ago.

After the Rails patch was released, James Kettle, Director of Research at PortSwigger, sent me a message on Twitter linking to a discussion on adding template literals to JavaScript where Gareth Heyes warns about the holes that will open up as a result.

... this will introduce a new class of DOM based XSS attacks since developers in their infinite wisdom will use this feature to place user input inside ...

What else is vulnerable?

Considering that I appear to be the first to report this type of vulnerability and how long it's remained unpatched, it makes me wonder how often it's been exploited in the wild and what other frameworks and modules share this same problem.

This issue has taken over a year to fix since originally reporting to the Rails team.

At least HackerOne has a badge for Patience

P.S. Despite the long timeframe for getting this fixed, the hard work of the Rails team and HackerOne staff is still appreciated ✌️